A Second Opinion Led to A Second Chance

To look at Blue Point resident and custom builder Jack Brady, Sr., you’d think the guy had never been sick a day in his life. But although heart disease had been flying under the 70-year-old’s radar for almost two decades, in the spring of 2021 that was all about to change, big time…

A second opinion at Stony Brook showed that all four of Jack's major coronary arteries were blocked.

It was in 2004, during one of Jack Brady’s usual home-gym, heavy-duty workouts—squats, leg presses, weight lifts—that the then 54-year-old workout buff, husband to Sharon and dad to Jack, Jr., felt a combination of lower jaw pain and some slight chest pressure while sparring with a punching bag prop known as Boxing BOB (or, body opponent bag).

Thinking that he might be having a heart attack (despite no previous heart history), Jack, in true Jack Brady fashion, quickly downed a few aspirin and drove himself to a local ER. It turns out Jack actually was having a heart attack. A cardiologist put the blame on a blood clot formed by artery plaque—fatty deposits—that had likely been dislodged by the repeated impact of sparring with “Bob.”

An estimated twenty percent of Jack’s heart muscle had been damaged. “In a bit of a twist, a punching bag kind of did hit back,” says Jack [with a wink]. Jack was treated and, for the next seventeen years Jack was robust, healthy and heart disease symptom-free.

Jack was awakened maybe two or three times a week by shortness of breath during July and August in 2020. He wrote it off to a handful of possibilities, none of which included heart disease.

Then, a chance visit to a walk-in healthcare facility for a Covid-19 test in the fall told a very different story. The Covid test was negative, thankfully, but the nurse practitioner on duty, after listening to Jack’s heart, offered, “You know what, I think we should run an EKG.”

To the shock of Jack and his family, after additional testing, he was diagnosed with congestive heart failure.

It was around March 2021 that Jack stopped in at the Nesconset office of his dentist for a routine visit. During what passes for chatting while in a dentist’s chair, Jack mentioned that he’d been having some problems with his heart.

Jack's dentist (and a Stony Brook alum), Richard Bonati, DDS, suggested that it might be a good idea to see his brother-in-law, Stony Brook interventional cardiologist, Joseph Franco, DO, for a second opinion. And, the next day, Jack did just that.

“Dr. Franco was as nice as he was thorough and my first appointment lasted 45 minutes,” says Jack. “Sharon and I were again stunned though when testing this time, including an angiogram—an imaging technique to view blood vessels—came back showing that all four of my major coronary arteries were significantly blocked.”

That was the morning of April 12. By the afternoon of that same day, Dr. Franco had arranged for Sharon and Jack to meet with Henry Tannous, MD, Chief of Cardiothoracic Surgery at Stony Brook and Co-director of the Stony Brook Heart Institute.

“But I’m Too Healthy for Heart Surgery…”

“Like Dr. Franco, Dr. Tannous was down-to-earth, knowledgeable and accessible,” says Jack. “No question Sharon or I had, no matter how minor, went unanswered.”

After additional comprehensive testing, Dr. Tannous advised Jack that due to his previous heart damage and the extent and severity of the current blockages (90, 80, 71 and 51%), he was not a candidate for a less invasive procedure such as stenting and would instead require a quadruple heart bypass, a form of open-heart surgery in which blood is rerouted around clogged arteries.

At one point, a still incredulous Jack found himself trying to bargain with Dr. Tannous, saying, “You know, as far as the surgery, maybe it’s not absolutely necessary. I feel really good, really strong—just a few months ago, on my 70th birthday, I made a boxing video….”

But the doctor replied, “Jack, listen to me, I agree that you’re in great shape. That’s probably what’s kept you alive until now. I don’t have a crystal ball, so I don’t know if it’d be two weeks, two months or two years, but without surgery these arteries of yours are going to kill you.”

Jack’s surgery took place on Monday, May 3rd, lasted 6 ½ hours and there were no complications.

“I woke up in the cardiac ICU feeling like, well, five guys had beat the ____ out of me, but was otherwise clearheaded and not groggy,” smiles Jack.

By Tuesday, Jack was walking across his room; on Wednesday, he did a little dance; on Thursday, he traveled 100 feet down the hall; and, by Friday, he was home again.

A physical therapist who visited two weeks after surgery noted that a perfect post-surgery ‘squat’ score would be doing 10 squats in 30 seconds. Jack did 20 in 28 seconds. The awestruck PT said he’d never seen anything like it in a 70-year-old man, let alone one who’d just had a quadruple bypass.

Jack Brady was back.

A Sincere Thank You to the Stony Brook Heart Care Team

“The combined efforts of Drs. Franco, Tannous and Dr. Tannous’s co-surgeon, Sathappan Kumar, MD, saved my husband’s life,” says Sharon. “We were very fortunate to have such a superior level of care and the best heart doctors available, right here in our community.”

Adds Jack: “There are no words that can do justice to how we feel about the Stony Brook heart surgery team. Not only was the care received at every turn, excellent—even what was supposed to be a scar down the center of my chest is, now, just a few weeks later, almost invisible—there was not a single person who was not loving and caring.”

“I never felt alone or forgotten or afraid,” says Jack. “Suffice it to say our whole experience with Stony Brook was amazing.”

Jack wants to make sure that his heart—and everyone else’s—keeps beating for as long as possible. “I had a bit of a scare and I was very lucky because I’m still here. My advice after this whole heart journey: Eat smart—low sodium, low fat, you know the drill by now—find the right cardio exercise for you and get tested. Even if you think you are doing pretty well and feeling pretty good, get your heart checked out, because in all honesty, you just never know." 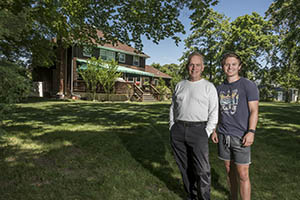 At home, Jack with his son

“My final two cents: Thank you to my incredible son, Jack, and to all my family and friends for their much appreciated support and good wishes—and a very special shout-out to my beloved Sharon who, as of this past June 26, will have put up with me for 39 years."

“Thank you, Sharon, for being there and for having my back—and my heart—every step of the way these 39 years. I have been blessed beyond measure.”